The 33 was destined to be made into a movie. It’s based on the real life Chilean mine disaster, where 33 miners were trapped underground due to a cave in, forced to do what­ever it took to survive while the out­side world tried to save them. The story grabbed our attention when it hit the news in 2010, and it’s still in­teresting five years later.

The film opens with a party, cel­ebrating the upcoming retirement of one of the miners. We get introduced to several of our miners, including Antonio Banderas’s Mario Sepúlveda, a family man who wants to work the next day to earn extra money for his family. Other miners are presented equally sympathetically—one has a pregnant wife! One’s a goofy comic relief character! If this were an action or horror movie, we’d be waving goodbye to them, as those clichés rarely last long. However, The 33 is based on a true story and doesn’t take such liberties with the characters.

This leads to the main problem with the film. If you’ve heard any­thing about the event on which it’s based, you know what will—or, more importantly, won’t—happen. Even watching the trailer, or even seeing the name of the film, you can guess that everyone’s going to make it. That’s a problem with making a mov­ie based on real life events—you lose some of the tension, as the audience knows certain things aren’t going to happen. In this case, you know that none of the titular 33 miners will die. It’s a wonderful outcome, but it also drains some scenes of tension. You know they’re going to make it through the collapse of the mine. You know they aren’t going to starve to death. You know they’re going to get rescued in the end. 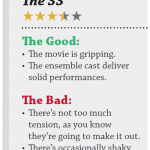 That doesn’t mean the film’s not worth watching. All of the actors de­liver solid performances, but within the large cast, Antonio Banderas as Mario, Lou Diamond Phillips as Luis, the foreman in charge of the miners, and Rodrigo Santoro as the Minister of Mining are the most memorable characters. Their emotional perfor­mances help the viewer to get emo­tionally invested in the film. As you might guess from a film called The 33, there is a large ensemble cast, with the miners, as well as their families, the media, the government, and res­cuers all featured.

The central focus may be what’s going on with the miners, but we also get to see what’s going on outside the mines, from the initial government responses to the media frenzy to the family reactions to the multiple res­cue attempts. There’s a lot going on in this film, mirroring all the differ­ent layers to the real event. And if you don’t like where it’s going in one scene, you only have to wait to see the events from someone else’s per­spective. It may be about miners trapped underground, but the view­er isn’t trapped underground with them.

For the most part, the visuals are great. The cave-in is stunning to watch, and you really feel the miners are stuck underground. However, the miners could have used better make­up effects to make them look like they’ve lost weight —they’re sup­posed to be starving, but they hardly look any thinner. Besides that, the makeup artists do a good job of mak­ing the actors look grubby, grimy, and otherwise like they’ve been living in a mine.

Overall, The 33 is worth watching not only because of great perfor­mances and a gripping true story, but it also shows what it’s like being trapped underground. It may lack in suspense at times, as the audience knows they’re going to make it, but it doesn’t take away from the miners’ real experiences.

A Defense of Offense

What’s Wrong With Being a Narcissist?