Jack White of the White Stripes cre­ated his label in 2001, Third Man Records, giving him the opportunity to bring in­dividuality and spontaneity back into the music industry. White brought the men­talities that are embraced in Third Man records into his side project. Blues/metal group Dead Weather, who have worked with White since 2009, consists of well-known musicians in the rock world that are collaborating to create something that breaks free from the rock mainstream.

Musicians involved in this group in­clude White as the drummer, singer Alison Mosshart from rock duo The Kills, keyboardist Dean Fertita, who is the guitarist for rock group Queens of the Stone Age, and bassist Jack Lawrence from the alternative/pop group The Ra­conteurs. While Dead Weather’s previous albums Horehound (2009) and Sea of Cowards (2010) are both heavily dis­torted and dark, their third album Dodge and Burn experiments with a sound that is more theatrical and chaotic while still keeping their blues rock influences.

If you are a fan of rock music and looking for something spontaneous, this is the album for you. The obscure lyrics and intense instrumentals create the abil­ity for listeners to channel a variety of stories.

Many people characterize White as the raw and gritty vocalist and guitarist of The White Stripes; this album gives him the chance to break free from the spotlight and focus more on his spo­radic drumming and demented backup vocals. Mosshart’s heartbreaking lead vocals are seductive and just as deranged as White’s.

The catchy intro of “I Feel Love (Ev­ery Million Miles)” is why it is the most popular song on the album. This song embraces the call and response aesthet­ics when Mosshart screeches “Why does my heartbeat feel like a speaker?” and is answered by an intricate guitar riff.

Mosshart tells Spin Magazine that the song “Buzzkiller” is simply about some­one who is killing your “buzz.” Although the song may have a simple message, it does not mean the instrumentals are not complex. This song is R&B influenced with echoey and dynamic sounds that bring the song together. 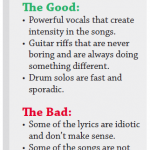 While Dead Weather’s previous al­bums focused on Mosshart’s shimmery vocals, the songs “Three Dollar Hat” and “Rough Detective” prove that White’s vocals are prevalent as well, creating a fiery explosion. While “Rough Detective” gives off a crazy kid song vibe, “Three Dollar Hat” provides a creepy narrative about Jackie Lee and his attempt to mur­der Johnny. It’s obvious that Jackie Lee is a psychopath when White sings, “I’m that bad man named Jackie Lee. Shooting everybody down with a .33.” The part of the song where Jackie Lee is about to shoot Johnny, he pleads “Johnny said to Jackie, don’t take my life. I got three young kids and a badass wife.”

The song “Lose The Right” sounds very similar to White’s energetic solo hit “Lazaretto.” This song has tons of drum improvisations that appear during sur­prising parts of the song.

While some of Mosshart’s lyrics have a clear message, others stray from con­sciousness. For example, in the song “Open Up,” Mosshart sings “Mind is faster than pen but the end is so stupid. Like bubblegum in your hair isn’t fair but it smells good.” Even though the lyrics are playful, the instrumentals go through a series of violent mood swings from crazy loud to soft. This song contains a rock-noir aesthetic similar to the classic rock band Rush.

Why would I recommend this album? While the band members of Dead Weath­er see this as a side project, the results of the record say otherwise. Dead Weather’s Dodge and Burn brings back the blues rock roots of Led Zeppelin and opens up a new palette for the genre. While some may see this album as another Jack White project, a closer look makes you think of the sound in the context of today’s mod­ern rock. While it is easy to believe that rock is dead since there hasn’t been a huge rock group currently sweeping the nation in 2015, Dead Weather proves otherwise.