Mortal Kombat X, developed by Neth­erRealm Studios and released on April 14, 2015, is the tenth install­ment of the Mortal Kombat franchise and avail­able for the Xbox One, PlayStation 4, and PC.

One of the greatest things that Mortal Kom­bat 9 introduced was an interesting story. Most games in the fighting genre do not take the time to create stories, but NetherRealm decided to create one anyway, and Mortal Kombat 9 was better because of it. Like Mortal Kombat 9, Mortal Kombat X includes a story mode that continues the story that was left off in the pre­vious Mortal Kombat. The story is well put together like its predecessor. It takes place 20 years after the events of the previous game, and because of this, the story focuses on the newer generation of characters, leaving out much of the old cast from the previous game. It’s a slight disappointment that such iconic characters such as Liu Kang and Kitana were given the back seat treatment when it came to the story. The story also includes quick-time-events within cutscenes. There is no negative outcome for failing these events so the inclusion of these gameplay sections seems out of place.

Speaking about gameplay, the gameplay in Mortal Kombat X is still satisfying. The fluid­ity of combat in the game is still as refined as ever and some gameplay elements from both Mortal Kombat 9 and Injustice—another Neth­erRealms product—make an appearance. X-rays from Mortal Kombat 9 make a return and are just as violent as the previous ones. Stage in­teractions from Injustice also make an appear­ance. When the match begins, players have the option to interact with certain aspects of the stage and use it as an advantage to get the lead over one’s opponent. There are also three vari­ations to each character that each have a dif­ferent playstyle so the player has more ways to approach combat with a particular character. Also what makes a return is the franchise icon, fatalities. Fatalities are even more brutal and violent than in its predecessor. 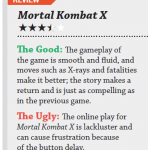 Other gameplay elements also make a re­turn. There are iconic game modes such as Towers, where players can battle waves of en­emies one after another, and The Krypt, where, an interactive RPG type mode where players can unlock certain aspects of a character. Play­ers can earn fatalities, costumes, concept art, and more with gold that is unlocked through progression in the game.

What also makes a return are online game modes such as rooms, where players can all be in a single room that holds fifty or so people and can create their own lobbies, such as for King of The Hill, and player/rank matches. However, this is when Mortal Kombat X begins to fall flat.

The online portion of the game is filled with lag and causes most games online to be frustrat­ing to deal with. This is due to the delay of the button presses. This can highly interfere with the player’s ability to perform combos, which is crucial in a fighting game for it to be enjoy­able.