However silly it is, Pokémon has always in­terested me, beyond the simple trappings of the turn-based games themselves. The logic behind the world, its fantastical ecology holds many fascinating ideas, like a tortoise that car­ries around a small ecosystem on its shell, or a cat-like creature that can perform photosyn­thesis. Its fantasy ecology shows a clear bias toward unrealistic points of interest like ele­mental magic, psychic powers, incredible physical ability, bright colors, and simplistic designs. Still, much can be gleaned even from its inaccuracies.

For instance, unlike actual life forms, Poké­mon have little to no genetic diversity within each species. One of the few species that has simulated genetic diversity is spinda; the small plushie-like creature with spots in randomized locations on its upper body. Other Poké­mon like sawsbuck shed their appear­ances in response to weather or, more realistically, the season, but they are generally the exception rather than the rule. Also, some Poké­mon simulate gender differ­ences, for example male unfe­zant, like real life ducks, have more flamboyant coloration on their heads than the females of that species. Again, though, few of the many even attempt to show gendered traits.

One of the series’ greatest distortions are the legendary Pokémon. Not only do they live in populations of one, making it hugely improbable that they could find a mate, much less raise living offspring. Even if these creatures were intended to be seen as quasi-deities, as they are presented, the series’ logic directly contradicts this, by showing multiple of the same species of legendary Pokémon on occasion.

The principal distortion of actual ecology, however, is the emphasis on fighting above survival and reproductive capabilities. For in­stance sceptile, a humanoid gecko-like Poké­mon, is said to be extremely agile, have the strength to cut straight through tree trunks, and release nutrients from the seedpods on its back to regrow the forest. Now, I have no way of knowing the exact amount of energy that would entail, but suffice it to say that the real­ism of that creature is wholly untenable. It would simply burn through too much energy, making it more likely to starve in times of scar­city. 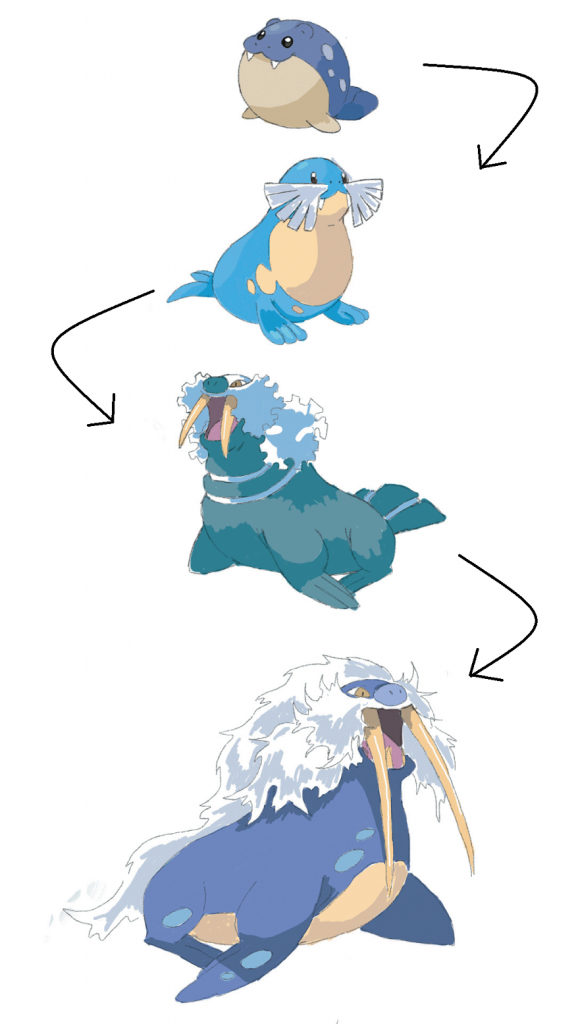 The same goes for the many giant Pokémon. The reason there aren’t any huge animals like snorlax in real life is that they too would expend a lot of energy just getting around. Not to men­tion that the ecosystem would be able to support less giants than smaller, more efficient animals, making finding a mate an even rarer occur­rence. As a result bigger creatures are liable to be outcompeted into extinction relatively quickly.

The series’ titular Pokémon evolution has probably misinformed many as to the true na­ture of evolution. Largely, the series empha­sizes individuals, whereas the smallest unit real life evolution acts in is local populations. Poké­mon evolution has individual creatures un­dergo dramatic physical changes, potentially multiple times within their lifetimes. For in­stance, it’s not everyday one sees a fox turn into a bipedal creature and then into a humanoid with psychic powers (in fact, it’s none of the days). Real evolution simply does not act that way, it is mostly subtle changes in existing allele frequencies (the units that determine a crea­ture’s expressed trait or traits for a gene). Fur­thermore, none of those changes happen with­in an individual’s life span, but rather are only expressed in the next generation.

As caterpie, and the many other Pokémon that evolve from a caterpillar to a cocoon and finally to a butterfly-like creature would suggest, perhaps Pokémon ‘evolution’ is simply a mis­nomer. It is more akin to some sort of meta­morphosis, granted it’s not terribly realistic. After all, no creature can just create biomass to grow so much in a matter of seconds. Take for example wailmer, a whale-like creature, it evolves into wailord, a bigger whale-like crea­ture, in a matter of 30 seconds. In so doing it grows from an average weight of 286.6 pounds to a huge 877.4 pounds on average. Again, it’s a rather silly proposition.

However many liberties Game Freak takes in creating Pokémon, and there are many, they inspire many to view our own environment in a new or renewed light. Especially for children learning about the environment, that’s a pretty legendary thing.

15 Things Stylish Women Do Every Day

Opinion: What do flower crowns have to do with Earth Day?