Sasquatch is an annual “neo-hippie” music festival founded by Pacific Northwest-based concert promoter Adam Zacks. It’s been around since 2002, featuring a range of musical genres, with an emphasis on indie rock bands and singer-songwriters. Also included are experimental rock, alternative rock, elec­tronic dance music (EDM), underground hip hop, and comedy. The festival is held at The Gorge, an internationally acclaimed concert venue in Quincy, WA.

One featured headliner is 25-year old hip-hop artist Kendrick Lamar. His 2012 album good kid, m.A.A.d. City contains singles like “Swim­ming Pools (Drank),” “Poetic Justice,” and “Bitch do not Kill My Vibe.” Lamar’s Compton roots provide him with traumatic experiences that give his music a sense of purpose. His album draws its power from Lamar’s ambivalent and conflicted relationship with the people and world that he chronicles. He is a straightforward artist that is known for storytelling, imagery, wordplay, and internal and multisyllabic rhyme schemes. 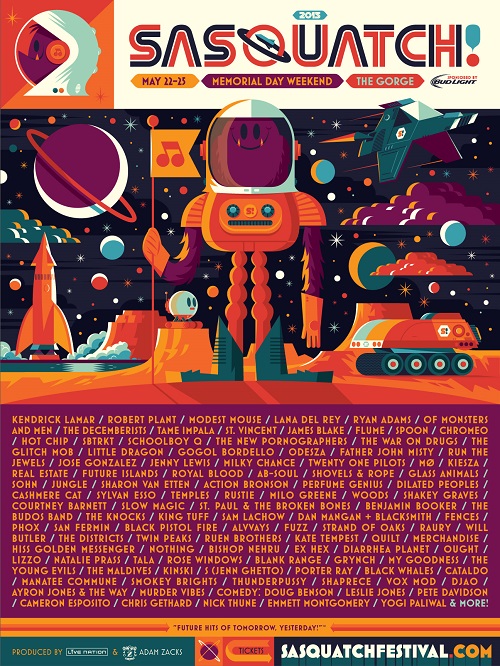 Another headliner from a different genera­tion is the famed lead singer of classic rock group Led Zeppelin, Robert Plant. Plant created a new band called Robert Plant & the Sensational Space Shifters, but instead of going back to his classic rock roots, his new band focuses on blues-rock and world music. The group incorporates guitar, keyboards, a 2-stringed West African lute called a kologo, a 1-string West African violin called a ritti, bass, and percussion. Plant says in Rolling Stone Magazine, “There’s something about it that inspires a more techno way… techno elements, samples, big ‘fuck off’ drum loops that fry you sometimes.” Plant adds, “It is a complete dy­namic juxtaposition to what I was doing, but they are both equally rewarding as musical ad­ventures.” A song from their new album Lul­laby &… the Ceaseless Roar has a song called “Turn It Up,” which makes Plant’s voice drift over a dark, disturbing mass of electronic creak­ing and cracking, with ominous, thudding drums and guitar playing that is somewhere between heavy riffing and West African roots. Their songs all differ, such as “Somebody There,” a warm pop song—not what the almighty classic rock legend Robert Plant is known for. This group proves that Plant still approaches music with pure passion, like he did with Led Zeppelin.

Yet another headliner is Modest Mouse, an indie rock group from Issaquah, WA. Ever since Modest Mouse was formed in the 90’s, they’ve played a crucial part in turning the Pacific Northwest into a fertile ground for indie acts like Death Cab for Cutie and The Shins. Modest Mouse is releasing a new album, titled Strangers to Ourselves, although they have not announced a release date. While their music taunts and their lyrics are sometimes cryptic and introspective, the band has managed to break through to the mainstream.

Last year Sasquatch played to sold-out crowds. According to TIME Magazine, Sasquatch was voted as one of the ‘Top 10 Summer Music Festivals in the US” by Concert Boom. This festival is a chance to embrace summer, meet strangers, and listen to fantastic music.

Why You Should Catch Up On Mad Men

Goodbye to Seniors, Hello to Jobs