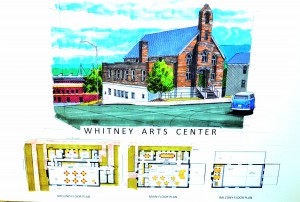 As reported last fall  by the Ledger, the nearly 11,000 sq. ft. Whitney Building (prior home to the Abbey Ballroom) on UWT’s sprawling campus, originally constructed to house the Methodist Church at 1901 Fawcett Ave., had its official ground-breaking ceremony as UWT’s new Whitney Arts Center.

The May 15 event was held in the Jane Russell Commons area of WPH. Student-artists spent the afternoon setting up many of their own art installations outdoors in light rain. The walk from WPH to the Whitney building (uphill one block from the Swiss) featured many artworks ranging from small cloud-like objects to large and colorful structural pieces.

The main event featured a catered meal with socializing and networking opportunities from six to eight pm. All of the art installations were taken down afterwards. Photos will be posted with the web version of this article.

The drawings for the conversion of the Whitney building show that the balcony will have a computer lab on the west end of the building open to the space below with seating for eight students and two printing stations. The main floor features a large classroom with several separate rooms including: a visual resource library, a seminar room and a work room. The ground floor or basement has the largest area and includes another large classroom with an additional 300 square foot shop area. The ground floor has a large office and a workroom with kitchen appliances. The drawings show a small elevator to provide access for differently-abled students. The upstairs classroom (formerly the congregation seating area of the church) will have a high, vaulted ceiling with large arched windows, perfect for hanging large art installations.

Professor Beverly Naidus, artist, author, and tenured member of the UWT faculty, co-created with UWT’s Senior Lecturer, Tyler Budge, the fledgling “Arts in Community” program which was approved by the IAS faculty in 2007.

Improvements are now in the works to the church building to make it ADA accessible and to have ventilation, lighting, and other updates needed for the art program installed.

Randy Cezan, a UWT senior who is a student-teacher, orchestrated the outdoor art installation project with 16 students, and titled their artworks “Tensegrity”. The project was based on democracy and cooperation. All entries were built in miniature, and the students then voted on their four favorite pieces. No student was to work on the full-scale set-up of the piece that they themselves had designed.

“It is based on an idea by Buckminster Fuller, the geodesic dome guy. ‘Tensegrity’ is the concepts of tension and integrity together,” said Cezan.

The colorful structure of arrows which was set up in front of the basement doors of the Snoqualmie Library building was the work of Amanda Grey, an Arts, Media and Culture junior at UWT.

Indoors there were also many student-created artworks displayed including posters covering all four walls of the room. The student-artists had been instructed to take the ideas for their forms from nature.

“I saw these tiny little flowers and took the form from them,” said Adrienne Siciliano, about her art-work hanging in Jane Russell Commons during the event. Adrienne has recently been accepted into the Milgard School of Business at UWT. 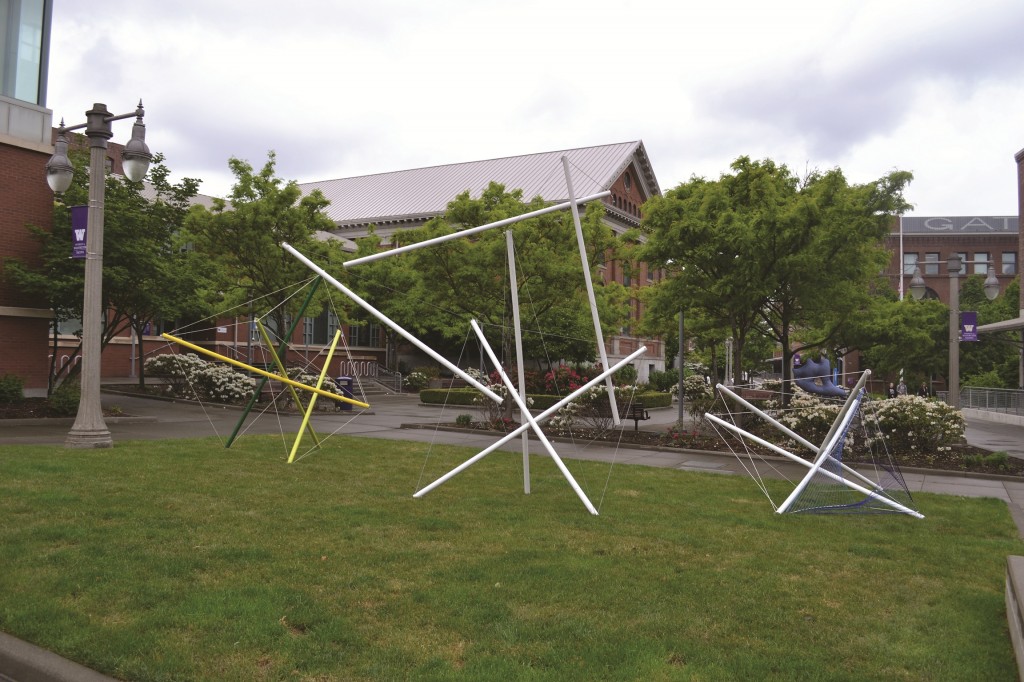 Fashion Annoyances and How to Avoid Them