Romantic love in video games has always elated me since childhood, like “Final Fight” on the Super Nintendo where there’s a framed animation of Jessica’s feet rising on their tip-toes to kiss Cody.

The greatest love story in video games is “Final Fantasy VIII” for the Sony PlayStation.  The most memorable scene is when Squall rescues Rinoa at the Sorceress Memorial by slicing open her chamber with his gunblade, and she emerges from a cloud of fog for an embrace.  As they hug, Squall lovingly brushes Rinoa’s black hair. “Eyes on Me,” “Final Fantasy VIII’s” love song, is the greatest of all love songs in video games.

I like video games with romantic elements, even if action dominates the game.  However, what really annoys me about certain video game characters is when they can’t take a hint.  For example in “Final Fight’s” ending, after Jessica catches up with Cody, she asks him why he walks away from everything. 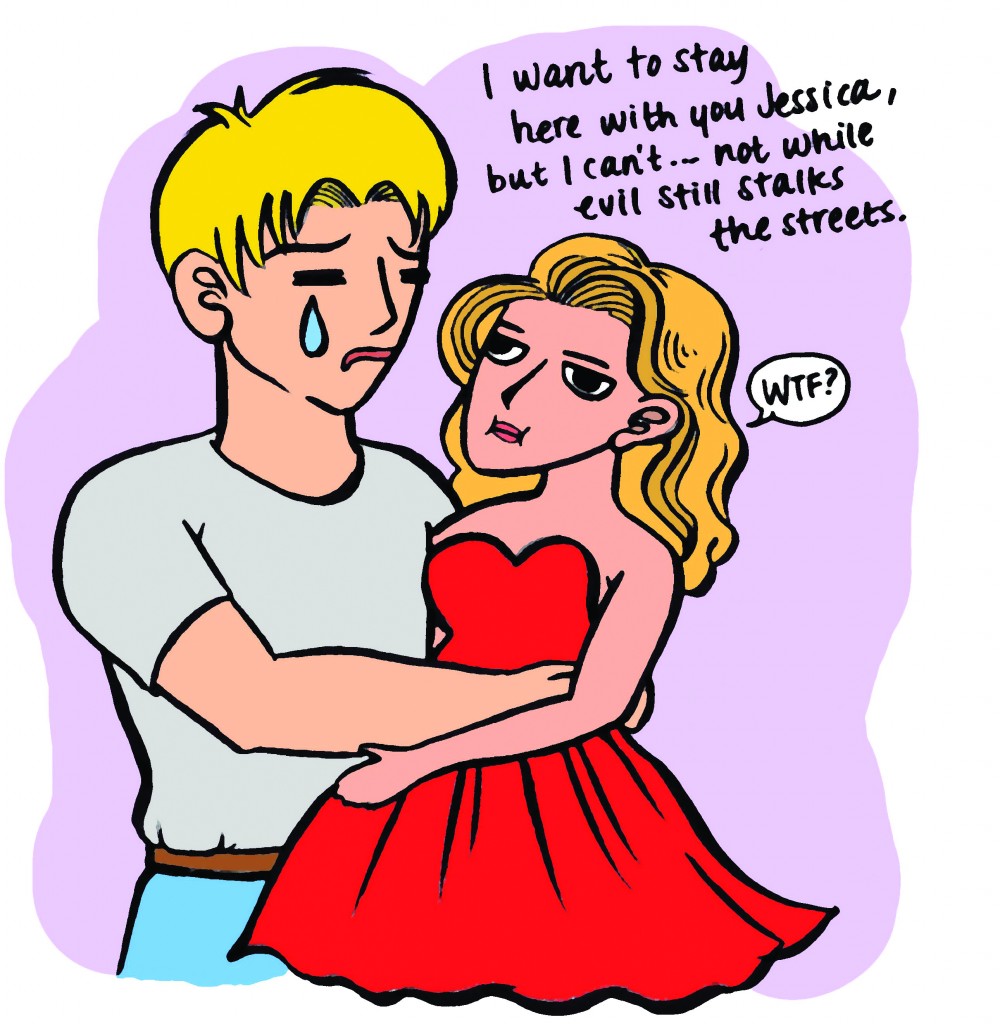 Cody says, “I want to stay here with you Jessica, but I can’t…not while evil still stalks the streets.”

So Cody would rather fight, getting into more brawls, than settle down with his beautiful girlfriend?  Cody sounds so formal; his speech sounds so orotund for a street fighter.  Why can’t he sound like that when he says he wants to stay with Jessica?

Another ending that perturbed me for its lack of a romantic element is the first “Ninja Gaiden” for the original Microsoft Xbox.  It’s a great action game that has fast, fluid action.  The bosses are challenging, forcing you to be patient and decipher their patterns.  What annoys me is that Ryu Hayabusa doesn’t hook up with Rachel the Fiend Hunter.  After Ryu defeats the final boss character Murai and destroys the Dark Dragon blade, he and Rachel look into one another’s eyes.  When I first played the game, I hoped for Ryu to pull down his ninja mask and kiss Rachel.

But what happens instead?  Ryu just turns around.  Rachel outstretches her hand and has a loving look in her eyes.  She affectionately says, “Ryu…”

But what does Ryu say?  He says, “It’s over…”  He then teleports away by transforming into the ghostly outline of a bird, and flying into the orange clouds of the sunset.

I felt disappointed after I beat the game.  Rachel is a beautiful woman (for a video game character).  She is very voluptuous and has plump vermillion lips.

The reason why I wanted Ryu and Rachel to become a couple is because there has always been this romantic void in my life, partly because I am not very physically attractive.  Although Ryu never takes off his mask in the first “Ninja Gaiden,” he’s an attractive man with a chiseled physique rippling beneath his ninja battle suit.  As with all video games, I became the leading male.  I transformed into someone cool.  All video games are like that, regardless of the genre.  A sports video game can turn someone into a famous football player.  A flight simulator can turn someone into a pilot.  And an action video game staring a ninja can turn a skinny kid into an all-action hero bad-ass.  However, there has always been that romantic void and I was disappointed that Ryu didn’t reciprocate Rachel’s affection.