The first time I had heard of Dishonored was from its “Daring Escapes” trailer, which showed the player utilizing some awesome mechanics to get away from perusing guards.  The character had powers like teleportation, time manipulation, and possession of other living things. None of those mechanics are new to games, but Dishonored made it all look so snappy and cool, and I was immediately dead set on playing the game for myself.

I’m a little bit late to the party on this one, but I’m glad that I eventually had the opportunity to give this game a run, as it is one of the best games I’ve played this year. It isn’t any individual aspect of this game that makes it unique; it’s all about execution.

Take the stealth mechanics for starters. Sneaking about is a core mechanic in Dishonored which is all but required in order to succeed at the game. Many gamers will attest that stealth segments in games which are not oriented as ‘stealth games’ can ruin the flow of the game and simply bog down the overall experience.

Dishonored manages to make stealth challenging without being a chore. With powers like ‘dark vision,’ which allows the character to see people and their fields of view through walls and objects, and ‘blink,’ a power for teleporting across small distances silently and instantly, finding ways to elude snooping guards is a ton of fun.

Speaking of the powers, they’re fantastic. One can unlock them in any order they choose. Certain other games would give you access to new abilities in a specific order because a new level might require you to use it. Dishonored is special, because every power is useful in every single mission. Since there are several ways to complete missions, new powers serve to add possibilities for either getting around or dispatching foes.

Dishonored has a lot of replay value primarily because of how open the game environments are. There are so many ways to find and complete the objective, and plotting and planning is just as fun and effective as winging it. 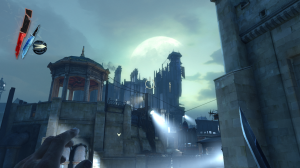 There are multiple endings, and the game has been criticized for using a binary morality system. Admittedly, it can be a damper having to choose at the outset whether or not you’ll want to run a pacifist play-through or simply go on a murderous rampage, but the fact that the game has made it possible to play through the entire game without killing a single person is still pretty sweet.

Dishonored is a blast to play and is one of the best designed games of the year. It is a tad short so if you aren’t the type of person who plays games a second time, you may want to rent this one, but because it is so much fun I would consider it well worth at least two runs through.

Give the Gift of Great Reading