In 1937 during the midst of the down­fall of the economy, the original “A Star Is Born” was released in all of its tech­nicolor glory. Seventeen years later, the iconic Judy Garland starred in this musi­cal remake that strayed away from its predecessors. In 1976, Barbra Streisand adds a little rock and roll to thicken the plot, but turning back to its roots from the ‘37 flick. Now here we are in 2018, living through the fourth remake of this phenomenal story where country music meets pop and two of the most influen­tial artists teamed together to recreate something inspiring.

The 2018 version of “A Star Is Born” tells the story of famous country musi­cian Jackson Maine (played by Bradley Cooper, who also directed and produced the film) who falls in love with an aspir­ing singer Ally (played by Lady Gaga), where he serves as her mentor. As she begins to sing with Jackson, Ally be­comes increasingly famous, while he suffers from his alcoholism, causing problems with both his career and his love story with Ally. Without giving too much away, this story involves love, heartbreak, a societal message and a whole lot of catchy songs that leaves audiences obsessed with the soundtrack. 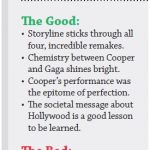 Although the storyline of this film is incredible, what really gave this mov­ie such a great rating was the chemistry between Cooper and Gaga. Their con­nection is so magnetic that the audience is able to actually feel the love between Jackson and Ally, both emotionally and musically. There are parts of the film that are subjectively tough to watch due to some of the main points of the story, and feeling the love between these two characters gets emotionally intense as the movie progresses. Their voices har­monized beautifully to provide the ul­timate soundtrack that is relatable for a diverse audience.

Cooper also did a fabulous job at turning this fourth-time remake into what is seemingly its own film. Not only did he act and sing perfectly, but he also produced, wrote and directed this film by bringing a new twist to the original storyline. As an actor, he played a misunderstood drunk, and he played that part to a tee. This movie deserves an Oscar nomination for his part of the story, because he truly did a phenomenal job.

“A Star Is Born” had a fantastic sto­ryline, but what it lacked was the steady progression of the film. The beginning was action packed and had a lot of infor­mation thrown at the viewers, but the middle was slow and lacked entertain­ment until the plot twist ending. This isn’t necessarily a bad thing, but the events throughout the film could have been spaced out evenly so that there were no parts that were left being slightly boring.

Cooper and Gaga’s film gives insight into the life of Hollywood, and how fame changes people. This societal message shows that the spotlight isn’t as bright as it may seem, and that everyone — even celebrities — go through their own issues especially under pressure. This may not be based on any particular true story; however, it does have familiarities to ce­lebrities in today’s society. From Britney Spears 2007 meltdown to Amy Wine­house drug overdose in 2011, fame is more than followers and money as it takes a toll, and “A Star Is Born” does a superb job clarifying that.

Opinion: Being mindful can bring peace and happiness to your life

A legendary performance from Lady Gaga