None of us want monsters to touch our streets, our classrooms, or our homes. Even one second is enough time for terror to successfully torture the soul and life of mankind if there is no real action to fight against it.

Holding meetings and phoning each other appear to be the only things leaders of big powers are doing in the wake of recent terrorist attacks conducted by ISIS. This seemingly small extremist group is turning peaceful streets into war scenes.

Addressing the nation about the terrorist attacks in Paris, President Barack Obama said, “This is an attack on all of humanity and the universal values that we share.” Unfortunately, this statement by the leader of the free world could have been used to describe every terrorist attack that has taken place both inside and outside the Middle East.

Although his statement sounds nice and all, leaders of the Western World are doing too much talking without actually taking any affirmative actions.

While the Assad Regime is certainly a concern, it’s not an immediate threat to the majority of the people of the world. Right now, our focus should be on defeating ISIS once and for all.

Our leaders need to go after ISIS effectively, which is a worldwide, man-made disease, and eradicate this disease that turns the pursuit of politics into the mass deconstruction of humanity.

ISIS has given birth to the disease. Therefore, world leaders have to go after the group without hesitation caused by their views on another group—the Assad Regime—that has ruled Syria for decades.

The United States and the Western World are facing a tough choice: which one, dictator Bashar Assad or terrorist group ISIS, should be removed first?

Keep in mind that the Assad Regime and ISIS have actually been fighting each other for years during the Syrian Civil War. ISIS is trying to topple Assad. They hate each other!

When terrorists are committed to attacking a country, they don’t care if that country is governed by a dictator or a democratically elected leader. Because they treat every people of every nation as the target of their killing, all of us should politically and culturally treat them as the common foes of humanity.

Your enemy’s enemy can be useful to you, at least for a while. As Piers Morgan, a former CNN host, writes on Daily Mail Online, “[Supporting Assad] is now the only realistic option left to try and bring about peace in a country ravaged by five years of bitter, bloody war.” World leaders have to realize that there is only one foe they can focus on right now while the shadow of terrorist violence is cloaking the entire world.

Bashar Assad may be one of the most tyrannical dictators in the world.“His military has used chemical weapons and continues to drop barrel bombs that indiscriminately hit combatants and civilians alike,” according to the Associated Press. But ISIS has to be removed earlier than Assad because “Assad’s forces are not directing attacks in European capitals, beheading Western journalist and aid workers, or downing Russian passenger jets,” says the AP.

Assad is bad, but he isn’t among the foes we have to worry about if we all want to make it back to the dinner table at the end of the day. 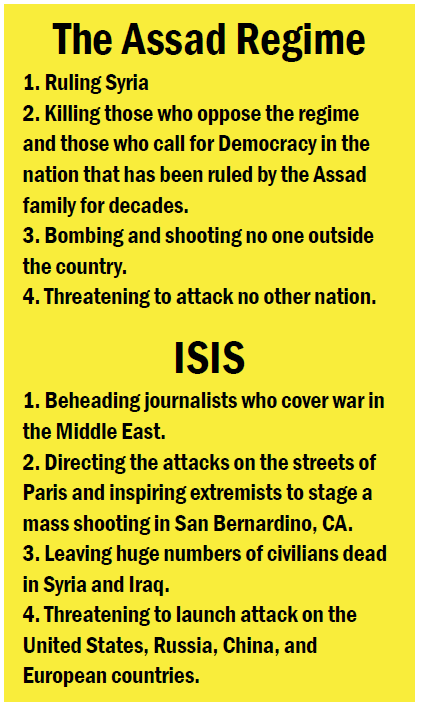 speaks of the tension between the United States and Russia due to the matters in Ukraine, “this is no time for self-defeating.” Sadly, toppling the Assad regime appears to be the only thing the western world wants to do in the Middle East. In the meantime, western world leaders sell the impression that ISIS can only be found in the Middle East. Putin might have the ambition to expand the Soviet-style politics and economics in Ukraine, but his attempts do not lead to explosions in the United States or the rest of the world.When a monster coming from one side tries to put you in danger, focus on that side! If Ukraine is really the reason the US and Russia refuse to work with each other on fighting ISIS, the world would just become silly and sad for us.

The people of Syria need help; they, too, are the victims of ISIS. The Paris attacks have taught us that the Middle East isn’t the only place where members of ISIS want to project power, but we must remember that the bulk of innocent casualties lie in the Middle East. While no numbers have been released on how many people have been killed by ISIS around the Middle East since the group was established, according to CNN, “at least 17,049 were recorded killed in Iraq during 2014, roughly double the number recorded in 2013–which in turn was about double that of the previous year due in large part to the ISIS offensive and the military response to it by Iraqi forces and the U.S.-led international coalition.” When we have to face two killers at exactly the same time, we should kill the one that desires to kill us ourselves first. Assad is bad, but his border blocks a worldwide threat for us.

Russia, a known ally of Assad, has become one of the first nations, along with France, to stand up to ISIS by starting airstrikes that have seriously demolished ISIS’s critical facilities and killed a countless number of  members, including four senior leaders, according to CNN.

Putin may want to save Assad’s regime from collapsing, but he is objectively helping the world. World leaders have to use the power they have to help us make terrorists less powerful. Their agenda should be the preservation of the entire world, not just one region.The people of Syria need help, but we ourselves should be strong enough first to be the able helpers they expect. If those inspired by ISIS continue to throw bombs on our streets and open fire at people at community centers where we are supposed to have fun with one another—if we can’t even stand strong at home—how can we be a good fighter beyond our own door? At least Assad didn’t directed anyone to bomb bar-goers and concert-goers in Paris or inspire anyone to turn a social services center for the disabled in San Bernardino into a chilling scene of a mass shooting.

“We need a strong viable coalition including America, the UK, France, Turkey and yes, countries considered our foes like Russia and Iran,” writes Morgan. You might not like the person who sits right next to you in a room, but if a you fall from your chair, he could be the one who picks you up.

If the United States and the Soviet Union stood with each other in taking down Hitler, why can’t we take a strong step forward together to take the terrorists out of our air? World leaders have to know the clock is ticking and there is no time to wait!

The fate of Assad should not distract our world leaders while the fate of humanity is under attack by terrorists without borders.

Restrictions on Food Stamps are Cruel and Pointless

Opinion: Calm down about Russia

The 2016 Election Has the Young Caring About Politics Again