Marvel has had a great deal of success lately in the movie business, but so far, DC has been ruling television. However, Marvel hopes to change that by teaming up with Netflix to bring Daredevil to your screen. The character was last seen on film in 2003’s Daredevil, a movie starring Ben Affleck which critics and audiences alike panned.

So, is this new take on the character worth a watch? Absolutely. This time around, the reviews are solid, and for good reasons.

The first reason is it’s a visually inter­esting show. Set in New York, the series takes advantage of all the location pos­sibilities, showing both the gl 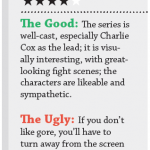 amour and the grit of the city. The fight scenes are filmed well, and we get to see how the main character senses the world, rather than sees it.

The main character is Matt Murdock, played by Charlie Cox, who lost his vision and gained extra keen senses in an acci­dent as a child. Now a lawyer, Murdock fights legal battles by day and crime by night. The series is part legal drama, with intense courtroom struggles, but its heart is with his struggle to save the city.

And it is a struggle. Daredevil is a violent show, rated TV-MA for a reason. If graphic violence makes you at all squea­mish, then you should give this series a pass. People get shot, impaled, and, in one particularly memorable scene, bashed to death with a car door, and a lot of it is explicit. This is not something you would want to watch with kids around.

Although there is a darker tone to the series, it also has a sense of humor. A lot of this comes from Murdock’s best friend and partner at the law firm, Foggy Nelson, played by Elden Henson. Foggy, along with their secretary Karen, played by Deborah Ann Woll, help to humanize Murdock as well as having their own character moments. Rosario Dawson and Vincent D’Onofrio help round out the cast, all giving powerful performances.

The most powerful performance, un­surprisingly, comes from Charlie Cox as Murdock. He embraces the dual role of the charming blind lawyer and of the secretive, uncompromising superhero, as well as the pathos that comes with having a secret life. The series is worth a watch for him alone, as his charm and his in­tensity are captivating. Overall, Dare­devil is a risk well worth taking. Watch the full first season exclusively on Netflix.