Life is Strange is a choice-driven narrative game, which, in English, means that it’s an adventure game that lets you make choices in either conversations or more active situations. These choices all have interesting and occasionally unexpected consequences throughout the week Life is Strange takes place in.

The protagonist, Max(ine) Caulfield, is returning to her (fictitious) hometown of Arcadia Bay, Oregon to attend Blackwell Academy for her final year of high school. In returning she must face her now-estranged best friend Chloe Price, who she hasn’t spoken to for several years. Chloe herself is searching for her missing best friend—who she made in the time Max was gone—Rachel Amber. The plot kicks off when Nathan Prescott, the mentally unstable son of the school’s benefactor, nearly shoots Chloe in the school bathroom. There Max discovers her power to rewind time and saves Chloe in the process.

Life is Strange sees you following Max through her daily life through a linear sequence of explorable areas. Each of these areas is filled with interactive objects, complete with Max’s—often humorous—inner monologue, conversations with other characters via dialogue trees (conversations where you choose which line of dialogue to say), and the occasional puzzle.

Integrated into all of these systems is the rewind power. How this works is that you can make a choice, then rewind to see if the other option would work out better in the short term. Similarly, you can rewind conversations to see the other dialogue options. Rewinding to see other dialogue tree branches and skipping through already-heard dialogue is a huge convenience that every other dialogue-driven game should take note of. In a particularly interesting scene Max can grab her dorm mate’s pregnancy test, read it, and rewind to before she looked like a total creep to play the understanding friend. Who needs tact when you have time powers?

Rewinding also works for puzzles, allowing Max to subvert the normal order of events. Life is Strange’s brain-teaser are almost all built around that theme. For instance, to get a tool kit from atop a high-up washer / dryer our 5’5” protagonist must turn them on, shaking the tools onto the floor. However, the tools fall behind a table and are rendered inaccessible unless you rewind to push a piece of cardboard under the table, then turn on the dryer, then pull the cardboard back and finally retrieve the keys.

But about our pregnancy test-snatching protagonist. Max is—and I do loathe this—a vehicle for the player to inhabit, a blank slate generic enough for everyone to project themselves upon (blech). Ever the cheap narrative device, this cop-out at least fits with the player’s perspective. Reliving the same sequence of events slightly differently, often multiple times, inherently abstracts the player from the world. This constant position of having some dramatic irony up on everyone else puts Max—and the player—in the same boat of slight detachment from the cast. You still feel connected to the characters, but actions in the immediate sense don’t feel as important because you can just rewind them away.

As can be expected, several different characters call out Max for being nosey. But snooping around is so fun (IN GAME.). Without a doubt the best parts of Life is Strange are the lived-in spaces that you get to explore, examining them through Max’s inner monologue, and learn about the characters in the process. The only way to play Life is Strange is to take your time and go through everyone’s things thoroughly. It’s entirely possible to skip past much of the game’s appeal if you’re in a hurry. 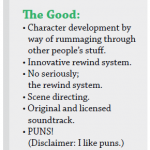 Without spoiling too much, Life is Strange has a great plot that’s not without its hiccups. The pivotal characterizations are on-point and the twists will keep you guessing until the end. Most characters outside of the core cast are one-note, but I like their individual notes. Each character gets a story throughout the week and they all contribute to Arcadia Bay feeling like a real, lived-in place.

But no pearl is without its blemishes, and thus Life is Strange has sometimes-awkward writing. Lines like “I like skater boys,” “Throw in a little green bud and you have the perfect hippie cocktail,” and “…Is that too hipster?” will earn the most groans, but incidental bad dialogue isn’t a problem for all but the most pedantic of people. (The dialogue writing is actually quite clever most of the time.) Certain plots are not handled as well as they could have been, but never dip below par.

Graphically, the game is beautiful—that said it has lip-sync issues, low-definition textures, and an occasional awkward animation. Despite all of that Life is Strange is truly beautiful; the bold lighting paints the clay-like character models, creating a very true-to-life, impressionistic look for Arcadia Bay. The realistic animation, competent voice acting, and brilliant cut scene direction only add to this. Together they craft a setting that is immediately recognizable to anyone who has lived in the Pacific Northwest. The title scene in the first episode alone made my jaw drop, and the directing only got more creative and impactful from there.

Life is Strange’s original soundtrack is composed by Jonathan Morali whose band, Syd Matters, also provides a couple of the licensed tracks. The original soundtrack has a lot of ambient, pensive songs that play in the background as you amble around taking pictures of squirrels (no, really). Generally, there’s a lot of acoustic guitar and soft singing.

Lastly, Life is Strange is not for everyone, particularly those who would be triggered by bullying, slut-shaming, and losing a loved one. A surprising number and breadth of very real social topics are addressed in its 15-20 hour runtime and there’s no shortage of darker themes.

Life is Strange is a lot of things. It’s modern tale that is anachronistically nostalgic at every turn, a veritable litany of after school specials that handles each story with a focus and maturity largely unequalled in its medium. If there’s a way to make interactive narratives, then this is it.

UWT Helps the Community This Holiday Season Through Gift Donations