Students at our university have been discontent about the failure of this in­stitution to thoroughly represent Febru­ary’s Black History Month. The need for diversity at UWT is presented in many forms. From the perspectives of students, we see a need to engage with the intricate and different histories that have produced them. In order to fa­cilitate these needs, responsibility falls upon both administrative bodies, such as the office of Diversity and Equity, as well as faculty. Beyond the duty of ad­ministration, where does the designa­tion of responsibility begin to overlap with students?

Our Black Student Union (BSU) has provided programming throughout February to celebrate American history of individuals of African descent—in­cluding a group viewing of the Oscar buzz film Selma, a lecture by Dr. Luther Adams on Black music culture, a Greek yard show which celebrates the tradition of Greek step-shows, and an upcoming soul food potluck on the 28th.

Aside from BSU’s efforts, regularly scheduled events by the Diversity Re­source Center, such as EMBRACE Seminars and the annual Diversity Sum­mit, there has been zilch. Where are the goose bump-induced readings of So­journer Truth’s famed “Ain’t I a Wom­an?” When will we receive lectures from visiting scholars on the issues of race that still persist in America? What is the point of the nationally proclaimed Black History Month? Why don’t peo­ple that aren’t black seem to care? Vice Chancellor of Diversity and Equity, Dr. Sharon Parker had the following to say regarding these concerns:

“It is important to note that Black history should not be limited to the month of February. There is a long and profound history of Blacks in America that bears ongoing examination beyond the designated month. I look forward to other DRC activities and programs on issues impacting African Americans throughout the months ahead. And I look forward to collaborating with the BSU in organizing and/or presenting such programs.”

With beginnings rooted nearly one hundred years ago as “Negro History Week,” the concept has grown to en­compass all of February, the shortest month of the year, but I suppose it is a start to shifting the primary focus from White, Heterosexist, Cisgender, Male history. Most of us know who Dr. King is, but who was Audre Lorde? Some of us have the privilege of being enlight­ened by academia, but how else are we to learn of the other historical figures that have fought for suffrage, civil rights, and solidarity? Outside of the class­room, to whom does the responsibility belong?

In order for our campus to cultivate an environment of diversity and equity, there is indeed a joint responsibility, but who bears the most weight? In regards to her experience at UWT, in working towards creating this environment, Se­nior Ethnic, Gender, and Labor Studies (EGL) and Psychology major, Shaquita Humphrey-Pressley had this to say:

“I’ve been on campuses that support students of color through intentional programing all year. We do not do that. Instead, we see students and student groups coming together to create those experiences for themselves and by themselves, with very little institution­al support.” 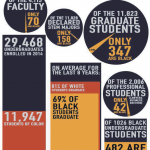 Often times, students who have sought support from the university have turned to faculty to which they feel they can relate, such as Dr. Adams who has been a large support to BSU operations, but he is a single person. When ques­tioned about the representation of Af­rican-Americans on campus, Dr. Adams stated:

“The more important question about equity at UWT is raised by the call for a walkout in protest of the woeful lack of black faculty and students at all three of the UW campuses. I am one of 70 black people employed as faculty at the UW – one of a handful here at UWT.”

With such scarce opportunity for mentorship, there is clearly a fault in the University, but also a national trend. The walkout mentioned by Dr. Adams has been spurred by immense dispar­ity in numbers of black students and faculty, which in turn contributes to the problematic under-representation of students of color at all UW campuses. On February 25 at 11:30 a.m., many will participate in a multi-campus walkout to call attention to this issue. Here in Tacoma students will gather in the cen­ter of the Grand Staircase.

With programs such as EMBRACE (Educating Myself for Better Racial Awareness and Cultural Enrichment), the Diversity Resource Center (DRC) seeks to foster the culture desired from the student population. BSU was re­cently officially registered as an associ­ated registered student organization of the center. The DRC stands ready to provide support in any way that they can, but they leave much of the initial momentum to be provided by passion­ate students. Though this may not be the most supportive action as a single department that has the responsibility of providing support to all diverse groups on campus, they are certainly stretched thin.

The department of Diversity and Equity, Interim Director of the Diver­sity Resource Center Robbie Lang re­garding these concerns stated, “We stand in solidarity with our students.”

In order to facilitate the desire of staff, students, and faculty to strength­en the representations of people of color at this university, it will take a joint effort. In learning the history of differ­ent cultures we are able to celebrate our diversity, and in that we become able to identify the places in which our identi­ties intersect. Systemic racism is real and so are the people that are affected by it, everyone (though in different ways). In order for us to eradicate the oppressions within our culture, which go far beyond overt forms, we must recognize all the ways in which we both voluntarily and involuntarily participate in that oppression. Resist the urge to stay quiet. Stand in solidarity with your fellow humans and call out the injus­tices that are happening before our eyes.