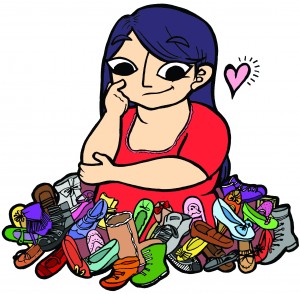 I was casually browsing Instagram one night when I stopped in my tracks as a pair of shoes in a photo caught my eye. They were black patent leather flats with a one inch rounded gold plated heel, with a skinny strap over the top and a tiny little bow near the toe. That was all it took for me to go on a hunt to find out where they were sold, if at all anymore. I took a screenshot of the photo and began my search on the Internet. To hell with my research paper; I needed to find those shoes!

Remember the simple days when you would only need to buy a pair of shoes when your old ones wore out or your feet outgrew them? It was nice to have crisp new shoes for a few weeks but the magic wore off after awhile and it was back to focusing on friends or video games or whatever kids cared about back then. You didn’t know that shoes could hurt or that there were shoes other than dress shoes and everything else shoes. You didn’t need multiple pairs to suit multiple needs, just some comfortable athletic shoes that increased your speed and didn’t leave any tracks (shameless “Office” joke, whatever, the series is ending soon.) Fast forward to now and I am a twenty-something with an unquenchable thirst for shoes that cannot be helped. While normal people stumble upon cash when they clean, I find shoes I haven’t seen in months.  My personalized ads on Facebook are of shoes I’ve browsed or bought online. People come to me to borrow shoes and I’ve held vendettas for those who don’t return them. To put this into perspective I will admire a girl’s watch and I will adore her jeans, but I will simply lust after her shoes. I have a growing list of shoes in the back of my mind at all times. I know how much each pair costs and I know where they are sold. The flatforms with buckles from Urban Outfitters, the cork wedges from Nordstrom… the knock off faux leather creepers from eBay… I daydream about having them all, and for whatever reason, it is a comforting concept. As I write this I have three tabs open on Chrome to shoe sites. Missed connections for most people entail seeing an attractive person at the light rail station and not getting to talk to them before they depart. My missed connections are shoes that I’ve waited to buy but aren’t sold anywhere anymore.

The list of shoe addict peculiarities goes on and on and it’s not just me. Celebrity closets are lined with hundreds of pairs of shoes that they will probably only wear only once. According to a 2010 Guardian article, Christina Aguilera has 750 pairs of shoes in her wardrobe and Paris Hilton has lost count and believes it to be around 2,000. There are women featured on reality TV shows that suffer from shoe addictions and even form emotional attachments to their footwear.

The crux of the matter is that you will never own enough shoes. Trends quickly go out of style as planned obsolescence is such a favorite practice in fashion. It’s a never ending cycle of thick heels versus skinny ones. The fashion industry operates in a way that makes the consumer feel like their wardrobes are never quite adequate. Even if I acquired each and every shoe I have ever lusted after, it wouldn’t solve the problem because most of them will go out of style in a matter of time.

I don’t know if this infatuation with shoes will ever end. As of now, I see the negatives in buying so many pairs. It’s detrimental to a college student’s budget, let alone anyone else from any other socioeconomic background. I will strive to remind myself of planned obsolescence or the many shoes I already have whenever my mouse is hovering over the “Complete Purchase” button on a shoe website.

Who am I kidding? I’ve got two pairs on the way.

Come Out to Girdy May 2