“If you grew up here, you probably aren’t going to be stoked on this town. If we want this place to be cool, it’s on us.” This is what John Crouch has taken upon himself to do for his hometown of Tacoma. As the owner of Pacific Avenue clothing store Bleach, John is instrumental in bringing culture to our City of Destiny. Just a couple years ago, John and his friends at Tacoma based lifestyle clothing brand Imperial Motion decided to open their own store so that their customers didn’t have to come to a warehouse to shop. They chose Pacific Avenue for its downtown retail vibe and close proximity to the busy schools and museums. In August of 2010, Bleach took over what was then a store called The Cool. 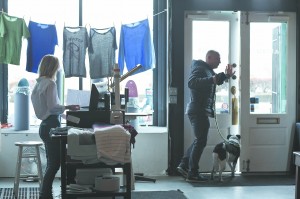 The place is a pristine shop full of neatly placed items of which you can’t find at many other places. John explained, “We strive to have unique products that people want.” “Bleach” is the name of John’s favorite Nirvana album, but also alludes to the type of look he wants for the store. Bleach, a cleaning agent, brings to mind a clean white canvas type of look where the items are the pop of color. They cater to mostly men’s fashion and sell clothing brands such as TOMS, Nike skate shoes, OBEY, Volcom, Lrg, and Imperial Motion. John’s favorite items in the store are the Tacoma Dome t-shirt and other Tacoma merchandise.

Art is a big part of what Bleach does. Bleach participates in Tacoma Art Group’s Tacoma Art Mingle. Tacoma Art Mingle is an event in which local businesses and art galleries come together to appreciate local fine art once a month. John often puts on free shows at Bleach where local bands perform and free beverages are served. These events are open to the public in efforts to foster a strong sense of community. Bleach has a printing press in the front of the store which they use to print t-shirts for special events. Imperial Motion and downtown Tacoma’s Amocat Coffee both contribute designs for the t-shirts.

The Bleach business motto is “Clothing + Culture + Connect.” Creating culture in this town is done by connecting the people of Tacoma through a common interest, in this case clothing. As for the future of Bleach, the main goal is to increase community involvement. Crouch said, “We are working together to form a walking district here.” One of the struggles of having a business on Pacific Avenue is parking. But with the downtown Light Rail and options to park at the Tacoma Dome, it is looking like foot traffic will only improve from here on out. It is really a cool spot on campus if you haven’t been there before. Support Bleach and stop by sometime!

Featured photo by Andy Cox. Other photo by Joe Keller.

UWT to Offer Masters in Cyber-security and Leadership