UW Tacoma may have its own mad inventor lab open to the public right on Pacific Ave. It’s still in the application phase though, so if it doesn’t go through…April Fools!

At this point in the process, they are still waiting for approval from UWT, but things sound promising. R. R. says they have been given creative venture status by Spaceworks and are hoping to move in to the spot where the gyro place used to be in the next month or so.

Ben Mauk, UWT’s Business Services Manager confirmed that they are still deliberating and working out the details but that he is eager to work with Spaceworks. 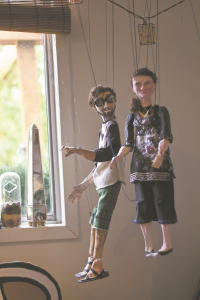 If you haven’t heard, Spaceworks is a program hosted through the Tacoma Arts Commission and Tacoma-Pierce County Chamber of Commerce. The idea is to put vibrant businesses into the many empty storefronts throughout the city. Fab 5, 2nd Cycle, Poppy & Co, write@253, and Feather & Oar are alumni of the program.

The Andersons’ alley is also a showcase for the Central Tacoma Free-Radical Media Exchange, which has lots of curiosities set at a price that would meet any student budget (that is, totally free).

The main idea behind Tinkertopia is creative reuse. It all started when the Creation Station in Lynnwood closed down (two of them still exist nearby in Portland and Vancouver, BC). The couple absorbed most of their inventory and the mission of bringing new life to old things.

R. R. might be better known around town for his cartooning, but Darcy is a skilled painter as well. Despite being a teacher at a Montessori preschool, she has found time to create signage for Tinkertopia, using high quality cardboard donations from the Tacoma Rubber Stamp Co. and chalkboard paint.

They probably would not have been able to rescue these items from landfills without the Tinkermobile, a van with a custom logo that they use to pick up and drop off donations or for other special events.

They picked up a donation of an antique piano, which has left them with many small wooden parts with hinges and springs attached. As I looked at one of them, my mind began sparking with all sorts of possible uses for them.

Architecture firms get a lot of samples to look at, and sometimes when they get filed away and start collecting dust, the material they’re sampling becomes out of stock, making the samples obsolete. Tinkertopia gets these leftover pieces of glass, tiles, wood, and carpet for use in their creative endeavors. 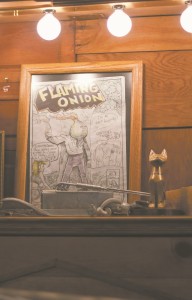 One donor gave a bunch of tennis rackets. R. R. showed me how they used one of them and did some embroidery to it that looks kind of like a pixelated alien from the original “Space Invaders.” He was also thinking you could stack a lot of them on top of each other and use them as a screen for a garden.

After showing off Tinkertopia, R. R. took us through his Central Tacoma Free-Radical Media Exchange, located in the alley off 19th Street in between Oaks and Anderson.

Its origin story begins when Stadium Video closed and the owner donated shelves to R. R. R. R. had been trying to think of ways to help clear out the “bad element” of the alley who had a tendency of leaving around a lot of garbage, and so far, the media exchange has been pretty successful in that area. He says now there are mothers visiting the alley with their children in strollers. Bicyclists will make a stop on their run, and all sorts of interesting individuals who come to take and donate.

R. R. told me that people take books, write reviews in the margins and return them.

He likes getting band demo CDs. Once, someone left a CD of a hard rock/punk band that did nothing but covers of songs by lady country singers.

They also have a space for zine distribution where fresh copies of local literary magazine Wrist can be seen.

People also leave classic comics. R. R. was amused to see a bunch of old issues of “Elfquest” on the shelves one day.

DVDs tend to leave quickly, but the VHS collection has kind of stagnated. Even a complete set of the first season of “Twin Peaks” has hung around for a while, R. R. noted. When a local video shop closed, they donated tapes to R. R. You can find some obscure action movies here that would be difficult to locate elsewhere, and R. R. has been going through and putting good ones out. He plans to use some of the plastic cases for Tinkertopia projects.

The Andersons’ four-year-old son, Max, is also involved in the project. He likes making robots and putting them up for exchange.

R. R. also has a business dealing sunflower seeds, using those bill envelopes with cellophane address windows people usually don’t even use anymore. What he calls Father Vix’s Anti-Nuclear Sunflower Seeds can be found at the media exchange. 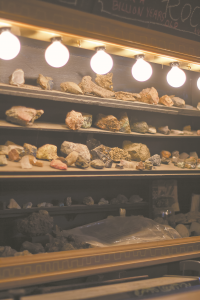 The media exchange is also bound by a garden that has raspberry plants growing in it. As they grow in the spring, visitors will be able to treat themselves to fresh berries while they browse.

When asked about notable donations, R. R. showed me a box of Classical Greek flash cards. They looked old, but I’m sure they aren’t too out of date. He also likes it when local writers and poets drop off their old writing books.

Since creating the media exchange, there have been some notable improvements. One lady volunteered to go to a craft store and get clear plastic table coverings to use as a rain guard. There is a USB port for those who have digital items they’d like to donate. In the case of a need for service, a buzzer has been installed.

My last stop on the tour was R. R.’s American Museum of Alaskan Entrepreneurship. In it, R. R. has all manner of Batcave-like trophies and utilities. Anderson describes it as “Central Tacoma’s smallest hyper-local political cartoon museum.” I was curious about a strange monitor installed in the wall and asked him to tell me about it. He replied, “A series of mirrors and cameras are arranged into a triangle monitoring disturbances in the space/time continuum. You can look into the vortex, but the vortex might look back into you. Highly unstable and results are often disturbing.”

I also got to see his famous anvil (apparently Holistic Forge Works is actually a forge, I thought to myself) and hear its story. He was able to take it with him when he moved to our area from Alaska thanks to being employed by an airline. One day it was stolen by metal scavengers and returned anonymously after a story appeared in the News Tribune. “Youu werrre verry lucky,” remarked my photographer Andy Cox.
R. R.’s personal favorite mediums are smudgy pencil drawings cleaned up in Photoshop and chalk art on public sidewalks like those created at the Frost Park Chalk-Off, which should resume as the weather gets better.

In the meantime, R. R. can be seen every week with a new “Tacomic” on feedtacoma.com where he can be easily communicated with in the comments or through his website at www.holisticforgeworks.com.

New Installment in the "Twilight" Series