What story would you tell, if you were asked to create a fairy tale? Volunteers from write@253 and members of the community had fun answering that question at the book release for Scarlet, by Marissa Meyer.

On February 21, King’s Books celebrated Tacoma author, Marissa Meyer’s young adult sci-fi/fantasy novel, Cinder, and its brand new sequel, Scarlet. The books are gaining in popularity and they feature futuristic takes on classic fairy tales. Marissa Meyer just had an author talk on February 5 for her book release and will host another one at the Tacoma Public Library Wheelock branch on March 16, so they wanted to make this one a little different, more like a party.

The bookstore owner reached out to local organizations like SotA to bring their robotics team, and write@253 to lead the community in an activity where they could create their own fairy tales. I volunteer with the group so I was on the email thread. I thought of magnetic poetry which led me to suggest having a classic fairy tale theme and have people add sentences on note cards to a group-created fairy tale. The volunteers got together and decided on the tales “Puss and Boots” and “Jack and the Beanstalk.”

This is what visitors of the event, who were of all ages, came up with: 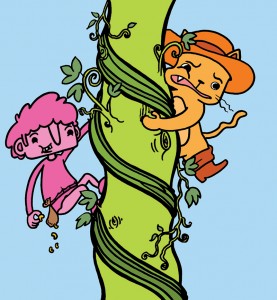 Far out in the countryside there was a poor miller who died, leaving his three sons all that he owned. The eldest son took the mill, the second son the donkey, and the third son was left with the miller’s cat…

The miller’s third son was disappointed, understandably. The cat saw this and hatched a plan, the first thing he needed was a nice pair of boots!

Because boots would be a great start. After all who doesn’t look fetching in a pair of smart boots?

So with a mind full of boots and a heart full of hope Puss ventured off to obtain these boots. Not paying attention to the road he nearly tripped over the tiny mous running past him. But this was no ordinary mous. The mouse had rollerskates instead of feet.

Puss raised his brows, “What are those?” He asked looking up and down at the tiny mouse with the skates. “What are those on your feet?” The mouse looked down at his feet and then at the cat with the boots. He twitched his whiskers and asked.

“Why are you wearing boots? Cats don’t wear boots” Said the mouse.

“Because boots are the height of French fashion! I got these at Feather + Oar.” Said Puss. “The local shoe store and pub.”

“Oh, in that case, the color is rather becoming next to your orange coat. I, myself would have chosen maybe a light gray, contrasting with my black tail,” said the mouse, as he flicked his tail for emphasis.

With that, Puss set out on his mission to prove his worth to his master.

He trekked across the vast country in search of the Diablo Cave of Gold. After many days he reached the mouth of the cave, and took his first step into its dark, wet mouth. Suddenly, a black cloud of bats was flying at him. Just in time, he threw himself on the floor of the cave. Then boots took his boots off he said to puss now that I get a good look at you you are getting super fat lose some weight dude you can do better than that.

Offended, Puss stood a bit taller and puffed out his chest and said, “I am not fat at all! My figure is the result of years of productive (and delicious) mouse-hunting and I am proud of it.

With that, he realized that he was already of value to his master, the Miller’s son. So he bought some swiss cheese, turned his fine boots into clever mouse traps, and kept the miller’s son’s home mouse-free for the rest of his days.

The third son bowed very low and accepted the honor the king had conferred upon him. That very same day he married the princess. The cat became a great lord and never again ran after mice except for the fun of it. 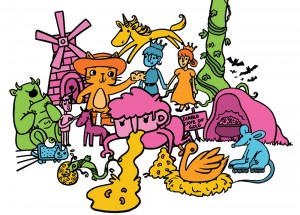 JACK AND THE BEANSTALK

There was once a widow who had a son named Jack and a cow called Milky White. They were very poor and had only the milk from the cow, which they sometimes sold for food. But one morning Milky White gave no milk at all and they didn’t know what to do…

Jack set out on adventure! And the first thing he did was… eat a pile of earwax flavored jellybeans.

There was one more jellybean and he planted it. Soon it started to grow a stalk. It erupted rainbows and unicorns. The land was flooded by the earwax eating rainbow giants.

The cyclops giant’s eyeball fell out and almost killed Nyan Cat. This nyan cat was about to get eaten then Jack came in between the giant and was caught. He was eaten but sliced open the stomach and continued on his awkward journey.

Jack wasn’t a squeamish guy but a tummy full of ear wax and an eye full of giants was taking a toll on the poor boy.

Suddenly his insides erupted and he became sick all over the floor. Jack heaved and heaved until he could heave no more.

So busy heaving he didn’t notice a golden goose walking by.

The goose looked at Jack. “Quack, you smell bad and have a gross, waxy substance all around your mouth.” Then he barfed a rainbow with glitter and eyeballs.

The duck was so startled he laid an egg.

This was no ordinary egg but an egg made of solid gold.

Jack stared at the goose, and then at the beautiful golden egg. It was carved with flowers and vines, cupids and suns.

Unexpectedly, from out of the egg burst a borg-like techno-beanstalk! Jack rushed up the vine away from the giants to find…

The land of milk and honey, of course, but he didn’t have any buckets to bring the milk home.

Intill they got mad because of the air they were fighting but then when they ate it it got worse. He said what the heck are you doing you need to use a spoon for soup not a stupid fork fatty got that. Yes. Then when they watch the rainbow they said man look at the blue and darkpurple.

Luckily they stumbled upon the band the Eagles!!! Who knew Don Henley could carry so many pails of Milk.

I always thought Glenn Fry was the strong one.

They became very rich from selling the golden eggs and making the golden harp play for the curious Jack’s mother’s scolding tongue was still and all their days were happy.

Grindhouse Theater: Tacoma's Creeping Horror that Lives Under the Bed

The Beginnings of the Recession's End