We are very fortunate that Tacoma screens many quality movies. Enriched as we are in a community that supports and enjoys good cinema you might be wondering: how does one create a successful film?

Well, I haven’t made any movies.

Wait, wait, wait! Don’t go! I did get the chance to hear from a couple of accomplished filmmakers. They’re from Tacoma, too! Mark Dworkin and Melissa Young have worked together to make movies that delve into a great variety of topics they’re passionate about, ranging from social questions like the impacts of DNA testing to theater and the arts. A handful of their movies have been screened nationally in theaters and on national television. Their production company, Moving Images, has worked on almost 30 projects that vary in length and complexity, and they’ve completed several feature-length efforts. Their work has been praised by both the film industry and national media critics alike.

On February 6, Mark Dworkin and Melissa Young were present at the Grand Cinema for a couple screenings of their latest documentary, “Shift Change,” about the growing number of worker-owned cooperative businesses that have emerged in the Northwest, nationally, and around the world. It’s an incredibly hopeful and empowering movie, and a great depiction of good things happening in the face of the economic difficulties currently being experienced in much of the world.

In the spirit of community involvement and great discussion, the filmmakers remained  after both showings to discuss the movie and the ideas it addresses. They also graciously attended my class the next day to talk about another documentary they made called “We Are Not Ghosts” which was about the waves of community development efforts and citizen activism that are strengthening in Detroit, Michigan. 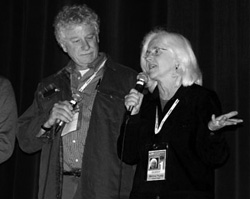 Mr. Dworkin shared that they always have a long list of ideas for new projects, but the idea for “We Are Not Ghosts” came about serendipitously. During a conversation with another like-minded attendee at the US Social Forum, it was suggested they should come to the city to see what was really going on in Detroit. The relationship led to a number of important contacts in the community and fortunately the story began to sprout like seasonal vegetables in the neighborhood gardens. Opportunity similarly took root later, when a movie of theirs was being shown at a film festival and someone familiar with their work approached them sharing about worker cooperatives in Cleveland and offered start-up funding to begin a new documentary which became “Shift Change.”

These anecdotes show that making it in the film industry is a social endeavor, as well as the hard work necessary to produce a good movie. The filmmaking duo said they like to have their movies show for a while in festivals and then gain a momentum that way. Just being present at events has helped them to meet new allies who share their interests and open up a broader range of directions.

Creating quality movies that people will take time to make and have people pay to see involves expertise and drive as well. For instance, getting good sound in addition to good footage is of course essential, but when filming real, live action, such as a large community meeting in Detroit, they had to move quickly to get microphones and equipment to each area of the meeting hall to capture the quality audio of the distinct speakers. At this year’s Urban Studies Forum, I myself had to get a mike around a crowd during a Q&A period. Despite my deer-like quickness and arresting good looks (useful for putting commenters into a state of, well, arrest), it was very difficult and I was awful at it.

Breaking into movie-making is a challenge like any other talent-filled profession, but our local stars Mark Dworkin and Melissa Young are showing that the path can be blazed triumphantly by dedicating themselves to the projects they are fascinated with and seeking communion with others in their areas of interest. Any time is the right time for new aspiring filmmakers to follow their trail.

Indie Game Review: Fun that is Faster Than Light