Pardon me for being a negative Nancy and getting uncharacteristically heavy, but to properly tout the awesomeness of the small business this article is about, I must touch on the problems of the retail industry for a second. For one thing, there is a growing disconnect (Marxists might loosely call it “alienation”) between the consumer and the manufacturer. For example, the people working in sweatshop conditions and making Mardi Gras beads likely do not know what they are for and how they are earned in New Orleans and other parts of the world. The people buying them likely have no idea where they were made and by who. As for another negative aspect of buying things, “planned obsolescence” is a common manufacturing practice in which products are made to break easily or go out of style quickly. This is where small businesses typically factor in by selling locally made items rather than mass-produced goods. 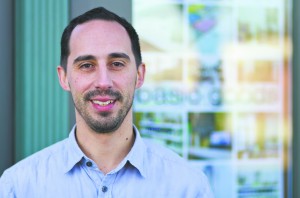 Donovan Wilson of home décor shop Basic Goods goes out of his way to bring integrity back to retail. Originally from San Bruno, California, Donovan ended up in Tacoma after his time in the Air Force and wanted to stay due to its “old charm.” After graduating from Evergreen State College, and then gaining experience in freelance illustration and architecture, he did some research and decided to open up his own home décor shop. The shop is located on campus inside an art gallery on Pacific Avenue. You will find nifty items like bamboo rolling pins, blankets from Lithuania, and vegan soaps. An innovative thing that I particularly loved about the store is its soap station. Instead of buying a new container of laundry detergent from the supermarket every month or so, Basic Goods aims to get rid of single-use plastic bottles with a station that you use to fill up one multiple use soap container.

Donovan believes in bridging the gap between the consumer and the manufacturer. He believes the customer should know where their product is from and its backstory. About 75 percent of the items available at Basic Goods are made in the U.S. The other items are products that he knows are made in democratic regions like Japan and Lithuania. Donovan believes there is a “beauty in function” and strives to offer well crafted items that are built to last. He aims to sell products that are made from honest materials that express functionality and minimalism. Function over form, natural materials over artificial ones, Basic Goods is a store you can be proud to support and offers products that you can be proud to buy.

Social Security Not in Crisis if We 'Scrap the Cap'