I am not gay, but if I were, I would go gay for Dante from the original “Devil May Cry” video game tetralogy, specifically “Devil May Cry 3” because his uncombed shaggy white hair looks more stylish than an S-rank combo.  My favorite scene in “Devil May Cry 3” is when he rocks out heavy-metal style with Nevan, a purple electric guitar-weapon that turns into a scythe and radiates bats.  But what looks most cool about the scene amidst the bursts of pyrotechnics on the stage is his white hair: how his bangs cover his eyes and his long locks cover his ears and fall down to the bottom of his neck.  Dante doesn’t look old, but he makes white hair look rocking.

When I heard that there was going to be a fifth “Devil May Cry” video game, I was excited.  I saw a preview–and was confused.  In the preview I saw was a young man wearing a dark brown trench coat fighting demons with a scythe.  The young man juggled the demons with fast and fluid precision as he was airborne.

And this main character was Dante, not another new character like Nero from “Devil May Cry 4.”

Sounds cool, right? No, it wasn’t because his hair wasn’t white!  The “Dante” I saw in the preview had brown hair that was shorter. 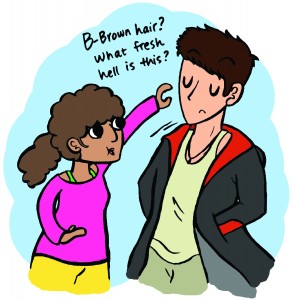 Time passed.  I learned that this “DmC” was its own original story, not a sequel to the previous four games.  But I didn’t care for the game, no matter how many previews I saw when I was bored.

Then the game came out a few weeks ago unexpectedly.  I heard the new game got pretty good reviews, another unexpected bit of information.  My friend and I got into arguments.  He said the game had great gameplay.  I still said the game would suck because Dante’s hair wasn’t white.

Later, I decided to place aside my reservations and got the game.  (I should really try GameFly.)

I played it and within the first level I was shocked as if the game’s techno/heavy metal music, the crimson visuals of “Limbo,” and spot-on responsive controls for hacking at demons made my hair whiter that the original Dante’s.

I was wrong: “DmC” is an awesome game.

One of the most annoying things in world is admitting that you were wrong.  One thing I don’t like to hear from anyone is “I told you so.”  I will never hear the end of it when my friend finds out I like the new “Devil May Cry” game, originally hating it before it even was released simply because Dante’s hair isn’t white.

After admitting you were wrong, you have to apologize and be humble, and that can be annoying, too, especially if the argument was over something geeky, like hair color.

One can go the usual route by kissing butt, but that is not sanitary.  Two other ways are saying “I was wrong” or “You were right,” but in the former, the focus of the blame is on your shoulders and in the latter, the focus of power is on the other person.

So what’s the best way to remedy the situation?  The best expression is “It was an unexpected outcome.”  Using this expression, one is not saying he or she was wrong.  The blame is shifted onto something else.

Besides, I’m not totally wrong.  There’s a patch of white hair in the new Dante’s brunette hair, and his hair becomes totally white when Devil Trigger is activated.

Glaciers Have Feelings Too

Dangers of Chemicals in our Bodies