Hot off of writing “Sicario” and “Hell or High Water,” Taylor Sheridan’s third screenplay and directorial debut concludes his “trilogy” of modernday Westerns. Jeremy Renner plays wildlife officer Corey Lambert, who finds himself hunting a different kind of predator when he’s called to an Indian reservation to investigate slaughtered livestock. Though, he instead finds the body of a native girl, whom the film opens with fleeing across the frozen flats of Wyoming. Corey recognizes her as Natalie Hanson, the best friend of his daughter who had died three years prior under similar circumstances. Suspected to be a victim of murder, a federal crime on native land, the FBI dispatches the inexperienced Jane Banner — played by Elizabeth Olsen. Assisted by Graham Greene’s character Ben, the wry-humored tribal police chief, and Corey’s familiarity with the native land, Jane attempts to track down the killer.

It’s immediately apparent from the onset of the investigation that Sheridan again sacrifices some of the leading lady’s dimension to move the story along — Emily Blunt’s underwritten audience-foil character in “Sicario” is another example. “Avengers” costars Renner and Olsen already possess the necessary chemistry to make their partnership work without a forced hackneyed romance. However, it’s Corey that’s given the bulk of the vulnerable character moments because of his personal connection with the reservation — his ex-wife, son and deceased daughter are all of native blood. This allows for some stellar tear-jerking interactions between him and Natalie’s father, Martin (Gil Birmingham). Jane has no such connection and is portrayed as generally unhelpful despite her efforts. There is a thematic point to this that we’ll get to, but it remains a consistent mishandling on Sheridan’s part.

Oh, but one can look past one flawed character if the story is especially titillating, right? Well, one shouldn’t go in expecting a tense crime drama, full of twists and turns. The investigation itself really amounts to a three-step process with minimal skirmishes to get the blood pumping, but the focus of the film is on the characters themselves. I was never bored by all the emotionally resonant heart-to-hearts that took place during breaks in the action. When the action does pick up, it only lasts minutes. I’m tempted to say we could’ve used more, but the spirit of the Old West is captured by what one is willing to do to survive, not the gun-slinging that oft-follows. While lacking the visceral cinematographic execution of Sheridan’s previous projects, it does enough to keep you from checking your watch. Cinematographer Ben Richardson elevates the wild 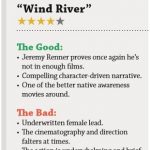 atmosphere in tandem with the dream-like score, but it can get shaky where it doesn’t need to be. This cleverly misleads you when building towards the climax, but the result is a bit more blunt than subtle.

However, what ultimately absolved this movie’s sins for me was its purpose. Swinging back to the point about Olsen’s seemingly useless character, this, alongside the investigation and everything between, is meant to highlight the plight of the Native Americans living on the reservation. According to the film, no federal or Indian agency actively collects crime statistics for native women despite them being much more likely to endure violence than any other race. Jane Banner thus becomes a stand-in for an unhelpful federal government. The land and the silence they are forced to inherit eats away at almost every character in the film in a wide range of ways: it drives people to depression, drives them to drugs, it even drives them to kill.

The inclusion of statistics at the end is an odd choice considering the mostly show-don’t-tell proceedings before it, but it’s harmless compared to the potential problems with its portrayal of native life, namely its leads. Corey is introduced through a sniper lens trained at a wolf to defend a flock of sheep. The connection is obvious. Together with Jane, one detects a “white savior” vibe. Despite this, “Wind River” remains a solid movie, if a little sloppy. It may not entirely deserve the awards it was nominated for, but it does deserve your attention.

Huskies hash it out with Montana Grizzlies