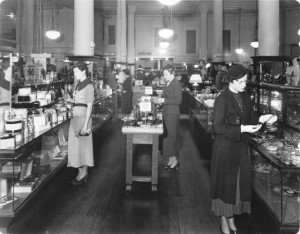 It is undeniable that the city of Tacoma has a rich culture. We are home to some of the best local music, great restaurants that serve unique cuisine (Red Hot’s Hosmer Hound Dog anyone?), publications like the UW Tacoma Ledger, theatre, and art. But Tacoma fashion is one of the most impressive aspects of our culture. Try walking down Pacific or Sixth Avenue and not being impressed with someone’s outfit. We have one of a kind clothing shops like UrbanXChange, London Couture, Bleach, Feather & Oar, and countless others that reaffirm just how important self expression is in this town.

In the early 1900’s, the fashion scene in Tacoma was just getting started. The downtown Tacoma area had men’s and women’s clothing stores popping up on every street. The sheer number of clothing stores downtown throughout the twentieth century would make you wonder how there was room for any other type of business. The clothes-buying experience was entirely different before department stores and shopping malls came to be. If you wanted a hat, you went to Reed’s Hats. If you wanted a new dress, you either went to a fabric store and made the dress yourself or purchased one at a women’s dress shop. If you needed new slacks you would head to men’s clothier Klopfenstein’s. If you needed a shoe repair or new shoes you would go to Bone Dry Shoe Store. As you can see, stores focused on individual needs for individual genders.

Since the opening of the Tacoma Mall in 1965 most these shops in downtown Tacoma gradually went out of business. Several shops such as Sears, Bon Marche, Lerner’s, JC Penney and Mode O’Day moved their location to the mall in order to stay in business. Even with the successful shopping mall in Tacoma, clothing stores in downtown have remained in business and the scene has made a comeback. There is a vibrant vintage and better-used goods scene all over downtown Tacoma with shops, like Glenna’s Clothing on Broadway, that sell items reminiscent of the past. Whether you prefer downtown clothing stores or shopping mall stores, Tacoma has always had locals who have a love for clothing and fashion.

The Firecracker Men who Built Tacoma