Many leaders and policy specialists have tackled this question. How will our transportation systems take us from here into the next economy? UWT’s Urban Studies Program along with many other sponsors, brought together a large group for the day-long event on Feb. 7 in UWT’s William Philip Hall.

A forum with representatives from four counties in our area served on a panel to discuss the issue and to answer questions from the audience about the future of transportation for our region.

How to fund a functional regional transportation system was a common topic during the discussion. After an observation from an audience member that he was disappointed not to have heard anything said about promoting the healthful transportation modes of walking and bicycling, all four panelists responded.

Kitsap County Commissioner Josh Brown explained that even with only 250,000 residents and four major cities Kitsap County has been working on facilitating bicyclist and pedestrian travel for the past ten years, and the City of Bremerton has recently made many investments to facilitate those forms of travel. 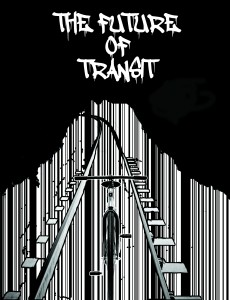 In response to the bicyclist and pedestrian question, Snohomish County Counsel member Dave Gossett said, “We are doing that.”

Deputy King County Executive Fred Jarrett responded to the same question, “King County has one of the largest regional bicycle and walking path networks in the nation.”

Pierce County Executive Pat McCarthy also responded to the bicyclist and pedestrian question: “Connecting our many ‘rails to trails’paths is important to us. The people support it. Those conversations are happening now.”

There was a lunch of sandwiches catered by Neighborhood Bistro, which houses the Culinary Skills Training Program for differently-abled people through the Tacoma Goodwill. Keynote speaker Robert Puentes of the Brookings Institution in Washington D.C. then addressed the group of about 200 participants.

Puentes expressed his frustration with “the hyperpartisanship taking hold of Washington D.C.” He cited the “8.8 million U.S. jobs lost in the Great Recession,” and added that “it is time to rethink the structure of our government, D.C. is broken and the States are broke.”

Puentes said that a “low carbon revolution” could create as many as 2.7 million jobs globally and 31,400 of them in the greater Seattle area.

Pierce County Executive Pat McCarthy said, “Studies show that the main reason businesses like Boeing stay here when the competition to move is so great is our quality of life in the Pacific Northwest. They like our clean water and air, Mount Rainier, Crystal Mountain, and we love it.”