Last week UWT, in partnership with the Black Student Union, hosted its annual Martin Luther King Jr. Unity Breakfast, featuring keynote speaker Carolyn McKinstry, and other various performances from students and other members from the community.

The theme of this year’s breakfast was “50 years and counting: the dream is still alive,” in honor of the fiftieth anniversary of King’s “I have a dream” speech.

“At UWT the ‘I have a dream’ is our real experience,” said Cedric Howard, Vice Chancellor for Student and Enrollment Services, as he closed out the breakfast by emphasizing UWT’s commitment to diversity. 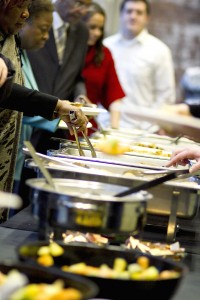 The breakfast celebrated, not only King’s dream of reconciling blacks and whites, but it brought together an array of multicultural performances.

To open the breakfast, the Black Student Union, Asian Pacific Islander Student Union, along with the Tacoma Chapter Jack and Jill of America Youth and other guests, sang “Lift Every Voice and Sing,” the Negro National Anthem.

Next came a traditional African musical number called Mbira, performed using ancient, traditional instruments, and it was combined with spoken word by UWT’s Akua Asare-Konadu. Following this performance was a hip hop dance by another student, India Irons.  And finally the Haka, a traditional tribal dance from New Zealand, was performed by APISU.

The breakfast also featured an alumni speaker, Cruz Credle, a graduate of the first freshman class, and past president of ASUWT.

“Nobody can say they had the same experience as me,” Credle said of the time he spent learning from the UWT faculty and staff.

He spoke of one most memorable moment during his college career: when Obama was elected as president. As a first generation student and young black man, Credle needed that type of role model to look up to, and now he strives to be that for other young men.

“Get involved with anything you’d like to make a difference in, shake things up and leave your mark,” he told the breakfast attendees.

The keynote speech was given by Carolyn McKinstry, who told her story of growing up in Birmingham, Alabama, and witnessing the Sixteenth Street Baptist Church bombing in 1963.

McKinstry, who was in the church when it was bombed, and lost four friends in the tragedy, believes she was spared for a reason. Now she travels all throughout the world speaking and sharing her story, hoping to further Martin Luther King Jr.’s dream of a “beloved community.” 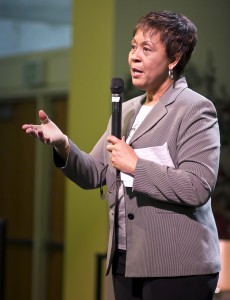 “I believe that Dr. King would be profoundly proud at the continued efforts at bringing about unity,” said McKinstry.

The world has progressed significantly since McKinstry’s eigth grade year when she was prohibited from competing in the national spelling bee because of her race, although she had earned the honor.  This progress is demonstrated through events such as the MLK Unity Breakfast. Still, however, McKinstry believes there is a lot to be done, that can only be accomplished if all of us become “a committee of one.”

“It’s time to stop watching and say something,” she said.

McKinstry witnessed this exact type of community commitment when, as a young teenager, she joined the millions of children who marched during the Civil Rights Movement. These marches are what prompted the Klu Klux Klan to bomb the church in the first place, one of 80 bombings in the area by which the Klan sent a message to the black community.

However, the church bombing, the only one for which perpetrators were prosecuted, also prompted the world to pay attention to unfolding events. It was what spurred on the Civil Rights Movement, and made Birmingham a beacon of hope.

In fact, after the bombing occurred, the black Birmingham community received gifts and condolences from all over the world, including one million dollars raised through a penny campaign run by children in Wales. The money went to replace a stained glass window in the church, which now depicts a black man with one hand reaching out against oppression, and the other reaching back as if to bring someone with him.

“If you think I don’t think about 1963 and become frightened, I still do,” said McKinstry.

The people who made it possible for such a tragedy to occur are still here, and oftentimes their negative voices speak louder than the positive ones.

King isolated three reasons why the world will never attain the “beloved community”: War, poverty, and racial hatred, all of which are clearly rampant in the world today.

McKinstry did leave the group with a challenge, and a way to start making a change that echoes King’s call to nonviolence: “refuse to become an enemy, refuse to hate.”