Do you remember when you were six-years-old? When first grade was your world and recess was the reason you wanted to go to school? For most kids at that age, the only thing going through their minds is playing tag with friends or learning how to ride a bike. But for Jason Kertson, it was a different story. Instead, Jason was more interested in music. It all started with him looking at one of his Dad’s guitars and asking if he could teach him how to play. From then on, music would become the focus of Jason’s life. 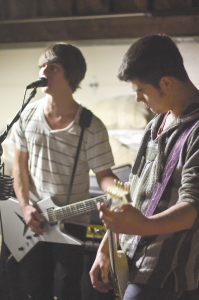 At age 12, Jason started making videos of his playing. Covering songs from Pink Floyd, Led Zeppelin, Alice in Chains, and many other rock and grunge classics. One day, a video of his was posted on YouTube. The video went viral and his career started to bloom. Shortly after, Jason got connected with world-renowned guitar player and metal front man Dave Mustaine of Megadeth. Now 15-years-old, Jason has the same skill level of guitar playing as people that are twice his age. It goes to show how important it is to practice if you want to become proficient at playing an instrument.

In the summer of 2011, Jason met bass player Jake Kelly (no longer in the band) and their current drummer Troy Wageman. From this, the band was born and decided to call themselves Jason and the Immortals. Since then, they have been playing shows all around the state of Washington. Places like Louie G’s Pizza, The Swiss, the Hard Rock Café, and Studio Seven. The band originated as a three-piece but recently has evolved into a four-piece band. Their newest addition to their band is guitarist Isaac Hernandez. The band itself has a hard rock sound, but you can totally hear the influences of each band member, especially from Washington grunge.

Jason Kertson explained some of his biggest influences, “My biggest influence is Alice in Chains, it’s where I get a lot of my writing and my guitar playing from. Basically everyone from the Seattle grunge movement, bands like Nirvana, and Pearl Jam. I really dig those guys and their music has really rubbed off on me.”

Jason and the Immortals are not only grungey, hard rock band, but they also show their talent through the guitar and drums throughout their songs. You can tell that they are influenced by other heavy metal artists.

Drummer Troy Wageman explained what artists influence his playing: “The first band I really started listening to was Slipknot. Joey Jordison gave me a lot of influences; his drums are just really aggressive and still technical. I always found his playing really interesting.”

Isaac Hernandez also explained his influences to his playing, “My biggest influence for sure is Children of Bodom. I worship those guys. I learned all their songs completely, from front to back. I love those guys.”

If you would like to check out Jason and the Immortals for yourself be sure to check them out on their Facebook page www.facebook.com/jasonkertson and their website www.jasonkertson.com. If you want to see them live, their next show is Saturday, January 12 at the Showbox Market in Seattle. The show starts at 6:30 p.m.; tickets are $12 in advance and $16 at the door.

Fashion Resolutions in the New Year

Hyde Park on Hudson Now Playing at The Grand Cinema